Submarines(Days of Ruin/Dark Conflict) or 潜水艦(失われた光) are a Naval Unit. Submarines prey on Battleships and Landers, but fall quickly to Cruisers. They have the ability to dive, hiding them from the enemy's view and can only be revealed if a unit is stationed next to them.

Submarines are initially introduced in History of Hate, and become buildable in Greyfield Strikes.

While on any water tile, Submarines have the unique option to "Dive". This makes them submerge and renders them invisible, unless another unit is stationed next to them. While submerged, they use more Fuel, consuming 5 per turn. Diving makes Submarine a tricky unit to destroy, hidden from indirect attacks and Cruisers, enabling them to conduct hit-and-run attacks on unsuspecting naval units. Diving does make Submarines very susceptible to fuel shortage, and if not enough attention is paid to them, can easily sink, removing a very useful unit from play. Only Cruisers, other Submarines, and missiles launched from Missile Silos can damage a submerged Submarine. Submarines built from a Port will always start submerged, regardless of if a human player or an AI built it.

Submarines are the bane of the seas. Two Submarines can take apart any unprotected Battleships and Landers caught in the open along with all units loaded in them. Submarines are most effective in two, and are best used to take out important units. Battleships are always a high priority, and always look out for any Lander with heavy armored units loaded in them, and wait for an opportune moment to take it out.

Don't dive when there's no immediate danger or there's no target to attack yet. Recklessly diving and leaving Submarines out far away from a port can leave them low on fuel very quickly. Use dive when there are Cruisers nearby, or to go around them to reach a Battleship. If resupplying fuel is not an issue, submerged Submarines can also be used for scouting or obstruct the movement paths of Landers and Battleships. Stay away from Cruisers and indirect units, and the Submarine will become more effective the longer it survives and the more units it takes out.

When facing against Submarines, always use Cruisers to block the paths of Submarines, or take the offensive and take them out before they submerge and escape. Use a Lander loaded with an Infantry to lure Submarines out - Lander can take at least 2 hits from Submarines, so if you have enough firepower, you can eliminate the naval threat without a unit lost. If you have located a submerged Submarine by chance using a land unit, use quick air unit to surround them, and wait for either the Submarine to remain submerged and have its fuel run out, or bring your indirects to take out the unsubmerged Submarine.

If you have a naval unit, always expect a Submarine to be lurking somewhere. If left running free, Submarines can deal heavy and surprise damage to your expensive naval army. Submarines are however almost as expensive as the units they are effective at taking out, so even when there's a naval unit present, it's usually better to wait for it to come into your indirects' range instead of building a Submarine. A niche unit that can only attack effectively 3 units, Submarines are an extremely situational unit that has limited uses but very proficient in its main purpose: to destroy naval units and leave unscathed.

If made into the CO Unit, be aware that the Submarine's location will be exposed by the CO Zone's display even when it's Dived, although it will still be both unexposed to the units themselves, and immune to all enemy units except Cruisers or Subs. 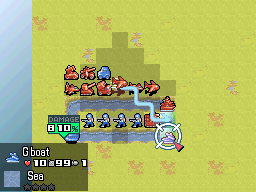