Advance Wars Wiki
Register
Don't have an account?
Sign In
Advertisement
in: To do, Advance Wars Days of Ruin Game Features 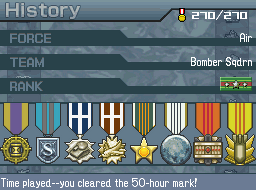 Records or History are a series of achievement-like medals that players can earn to track their progress in Advance Wars: Days of Ruin. The information is split into four areas, the upper sub-screen with large medallions and the main touch screen with three pages.

There are 270 total medals split across 90 statistics with three medals each.

This page details the amount of units required to be produced for medals.

This page details the amount of enemy units required to be destroyed for medals.