Start a Wiki
Olaf (Japanese: ホイップ Whip) is a Blue Moon CO along with Grit, Colin and Sasha. He has appeared in the Campaign mode of Gameboy Wars Advance/Advance Wars and Gameboy Wars Advance 2/Advance Wars 2: Black Hole Rising, but did not make a proper appearance in Famicom Wars DS/Advance Wars: Dual Strike. He is the leader of Blue Moon and specialized in winter combat, hence his CO powers are all winter related. Although his Units are unaffected by Snow, they act as though they are travelling through Snow when Rain is present. Described to be a pompous braggart whose tactical prowess has earned him the respect of his peers and the admiration of his people. He takes his work very seriously, especially when compared to Grit.

Olaf first appears in the original Advance Wars. He is fought immediately in Field Training mode, in which you, the player/Advisor, are teamed up with Nell, up to the first level of the Campaign, which depicts Orange Star CO Andy and the aforementioned player taking back the land that Blue Moon conquered. Players continue to face him in the first part of the campaign, up until the player moves into Yellow Comet territory. The last possible mission to face him is Mission 7, "Olaf's Sea Strike". To play this mission, players need to choose Andy's path after beating Mission 3, "Air Ace", which leads to Mission 6, "Olaf's Navy". If players defeat his entire navy here it will lead to "Olaf's Sea Strike". Capturing his HQ instead will lead directly to Mission 8, "Sami's Debut".

At first it is unclear why Blue Moon attacked Orange Star, but clues are given. After defeating Olaf in Mission 6, "Blizzard Battle" (part of Max's path), he states "Grrr... Not again! He will not be pleased with me if this losing streak continues.". He then orders Grit to stop Orange Star saying "I have to go and pay him my respects.". If beaten in "Olaf's Sea Strike", Olaf says the same thing but Grit, instead of just following orders, says: "Well, well, well... Olaf's finally off to see his mysterious benefactor. Think I'll just tag along behind and see what I can see."

Olaf is one of the 4 COs that are unlocked from the start.

Olaf's Units move unhindered in Snow. Rain acts to him like Snow does to normal COs.

Blizzard - Causes it to Snow until his next turn.

Olaf appears again in Advance Wars 2. Along with Grit and Colin he fights to drive Lash out of Blue Moon's land. Olaf's missions are Toy Box and T-minus 15. (Neotanks!?! and Factory Blues are optional).

Olaf vows to take out Black Hole because they (specifically Lash) destroyed his hometown in the Toy Box mission.

Olaf's Units move unhindered in Snow. Rain acts to him like Snow does to normal COs.

Blizzard - Causes snow to fall until his next turn.

Winter Fury - Summons a mighty blizzard, dealing 2 HP of damage to all enemy Units, in addition to making it snow.

Olaf has little to no role in Advance Wars: Dual Strike as he stays in Macro Land to help his country recover. His clone, made by Black Hole, appears in one of the later missions.

In Advance Wars: Dual Strike, his Units are not hindered by Snow. In addition, it also raises Olaf's units' firepower by 20%

Blizzard - Causes Snow to fall for 2 days (meaning it snows until his second turn after activating his power), forcing his foes to consume more Fuel (instead of affecting movement like in previous games). During those two days his offence rises by 20% on the first day and 10% on the second day. (This stacks with the effects of snow, meaning on the first day his units have 10% extra defence and 10% + 20% offence because of the snow and his CO Power).

Winter Fury - Causes a mighty blizzard, which deals 2 HP of damage to all enemy Units, plus the effects of his normal CO Power.

Olaf has Tag Breaks with the following COs:

The effects of snow vary from game to game, but the one fact that is true is that Olaf is superior during snowfall. However, he is a vanilla CO (like Andy and Adder), when it is not snowing and that's his biggest weakness. On the vast majority of maps and in competitive play, it does not snow.

Thankfully, Olaf can create snow with his CO Powers. It's generally worth waiting a bit longer to get his Super CO Power since it already does what his regular CO Power does and it damages all enemy units as well. The fact that he's a mass damage CO is significant in itself. He reduces the enemy's army by 1/5th and he's a good option for those who want to use a mass damage CO, but find Drake's Fog of War annoying or Hawke's power meter too long. The firepower boost he gets during snow (his day to day finally kicking in), as well as the penalties the opponent suffers during snowfall (which he does not suffer from), are a nice bonus.

Due to his strong Super CO Power, he's a good option on almost any map. 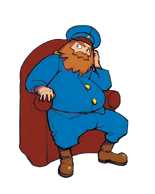 Olaf in Advance Wars: Dual Strike.
Add a photo to this gallery

Retrieved from "https://advancewars.fandom.com/wiki/Olaf?oldid=11233"
Community content is available under CC-BY-SA unless otherwise noted.