The New Rubinelle Army (New Laurentian Army in the European version, NRA for short) is a Force in Advance Wars: Days of Ruin. The NRA was formed by Greyfield after the meteors struck. They persuaded Brenner and the 12th Battalion to battle against the Lazurian Army. After the battle at Fort Lazuria, Greyfield ruthlessly orders Waylon to execute Forsythe, general of the Lazurian Army. Realizing that Greyfield was a madman, the 12th Battalion betrayed them, and aided the remnants of the Lazurian Army to escape. After several battles, the Caulder Missile Launcher was destroyed, and the NRA defeated.

Greyfield was shot by Lin, avenging Brenner's death. Afterwards, it was integrated into the 12th Battalion. 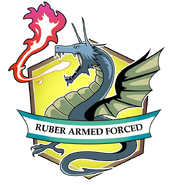 A Rubinelle soldier.
Community content is available under CC-BY-SA unless otherwise noted.
Advertisement