Flak (known as Kong 「コング」 in the original and Helmut in European version of the game) is a Black Hole CO. He first appears in Advance Wars 2: Black Hole Rising, where he is ordered to take out Orange Star. He was originally a low ranking soldier, but was promoted to his current rank by Hawke from private, impressed by his natural ability.

Depicted as a dense but well-built man, Flak resembles more of a biker, especially with his helmet and goggles.

Flak's mindset is all about smashin' stuff and CO powers reflect this; Focusing on risking to inflict more damage or instead dealing less than normal. This is called Dispersion.

At first appearance, he resembles Jugger a lot, because they have the similar abilities, and their CO power and even their Super CO power are almost identical but Flak's abilities rely solely on luck, so it might be advisable to equip him with the Luck-Skill to make the most out of this random potential.

Flak was given the order, by Sturm, to heed the conquest of Orange Star but was eventually driven off the countries by the stead-fast counter-attacks by Andy, Max and Sami. However, both he and Max formed a bitter rivalry after they exchanged insults during Max's first encounter with the brute.

Offended by the name-calling, Flak swears on a personal vendetta to make the muscular champion eat his own words when he returned to unleash an airstrike. (Though this was unauthorised, much to the discomfort of his troops)

However he was eventually driven off Orange Star's continent completely when they conquered the factory, that was responsible for Black Hole's invasion in the first place.

He then makes some appearences, especially during his attempt to use Yellow Comet's Missile Silos against them and defending an Super Missile Site from a combined arms assault from both Orange Star and Blue Moon.

His Units have high Dispersion range. They can do up to 15% extra damage or 10% less damage.

Brute Force - Further increases Dispersion range. His Units can do up to 40% more damage, or they might do 20% less damage. His Units also gets a 10% bonus to defense.

Barbaric Blow - Greatly increases Dispersion. His Units are able to do up to 80% bonus damage or they may end up with 30% damage reduction. His Units also gets a 10% bonus to defense.

His Units have high Dispersion range. They can do as much as 25% more damage or they can do 10% less damage.

Brute Force - Further increases Dispersion range. His Units can do up to 50% more damage, or they might do 20% less damage. Additionally, his Units get a 10% Offence and Defense.

Barbaric Blow - Greatly increases Dispersion. His Units are able to do up to 90% bonus damage or they may end up with 40% damage reduction. Also a 10% bonus to offence and defense.

Flak has Tag Breaks with the following COs:

There is none. Either he hits hard or hits weak. Pray that your hits benefit you on the coin flip.

In both games, he is inferior to Nell due to the negative luck, even if he has a 5% higher luck than Nell in Dual Strike. His day to day abilities, on average, have higher risk than Nell's yet yield little advantage in Dual Strike and no advantage in Advance Wars 2. He does, however, have a lesser luck gap than Jugger but not by much.

His Super CO Power (even before it was buffed in Dual Strike) doesn't provide as much of a damage bonus as Nell's and it comes with a potential damage penalty that Nell does not have.

Generally, he faces the same problem as the other luck-based CO's do in competitive play; combat-based powers are situational as they do not affect units which aren't engaged in combat that turn.

For Dual Strike, his tag partner boosts with Lash and Adder are insignificant at 105% or 110%. Keep in mind that Lash has gotten nerfed, so the 110% increase is very little.

Overall, if you want strategic games, avoid using luck COs like Flak.

"Grrrr! Two women COs! Good country! I must have it!"

"These bombers... They're indirect-combat units. But they can't fire on other air units. They're bombers. They bomb."

"Crushing stuff's what I do best! You got a problem with that?!?"

"Why think when you can fight!?" 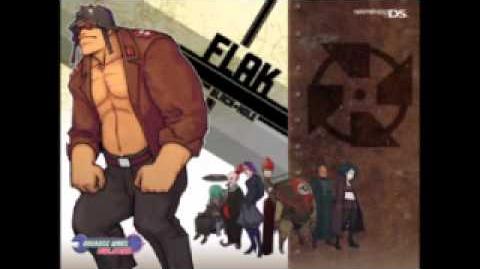 Flak: I envy you... Fight so many battles.
Lash: Stop your whining! Sheesh, what a wimp!

Lash: Well, I took care of that... Where've you been?
Flak: L-leave me alone!