Drake (Japanese: モップ, Mop) is a Green Earth CO. As a former pirate he is a specialist in Naval Units. Although his Naval Units have heavier armor and are faster, his Air Units are weaker than average. The movement of his units is unaffected by rain. He is good friends with Eagle, and is the only person who's percentage of Tag Power is highest with.

When you first meet Drake, Green Earth has already been attacked by the Andy Clone. At first he is suspicious of Andy, but after fighting him realises he was wrong.

Drake's naval units have +1 movement and +2 terrain stars by default. His air units suffer a 20% attack penalty. Rain does not affect his movement and the chances of rain occurring during random weather is increased by 7%.

Drake joins Eagle and Jess in liberating Green Earth from Black Hole's invasion of Macro Land. He tries to deal with the petty quarrels that go on between Eagle and Jess.

Drake's naval units have +1 movement and +10% defense. His air units suffer a 30% attack penalty. Rain does not affect his movement and the chances of rain occurring during random weather is increased by 7%.

A clone of Drake under the command of Jugger appears during the campaign much to the dismay of his friends.

CO Power - Tsunami: All enemy units take 1 damage and lose half their fuel as well as giving all ally units +10% defence (also +10% offense in Dual Strike).

Super CO Power - Typhoon: All enemy units take 2 damage and lose half their fuel. In addition, the weather turns to rain as well as giving all ally units +10% defence (also +10% offense in Dual Strike).

Drake has always been one of the weaker COs throughout the series. In Advance Wars 1, his naval units have 2 terrain defense stars effectively giving him 20% additional defense by default, which is pretty major. His naval units also sport a passive movement boost, a definite plus. Of course, Drake's air units are massively crippled to the point where players would reconsider building the otherwise useful Battle Copters. Drake obviously favors rain, as his units are not slowed down by them. Rain is not as deadly as snow, but it is still quite troublesome to the opponent, and Drake's chance of rain during random weather is something to consider too. Tsunami is a very respectable CO power, dealing mass damage to all enemies and draining their fuel, potentially causing massive trouble to naval or air units. Overall, Drake's naval combat is not something to underestimate and his land combat is at least decent enough. He has the worst air units, however.

In Advance Wars 2, Drake was noticeably nerfed. While his naval units still maintain one extra movement, their innate defense was reduced to only 10%. In addition, Drake's penalty to air units was worsened, with his air units now having 30% less attack. This makes air units REALLY not worth building as Drake, since their heavily lowered firepower makes them too weak to be of any decent use. Despite being a so-called naval specialist, Drake's naval units don't have particularly great stats. 10% defense and 1 extra movement is good, but their firepower is not higher. So in theory, COs like Kanbei and Sturm can actually be better at naval combat than Drake. Basically, Drake really does not handle naval combat than other COs, and his differences are hardly noticeable. His CO powers are still very good, with Tsunami causing the weather to rain for a turn, definitely something Drake prefers. It is perhaps important to note that naval units are extremely underpowered in Advance Wars 2. They are all VERY expensive and have limited niches. Overall, Drake in this game does a poor job of attempting to showcase Advance Wars 2's already pitiful naval combat.

In Dual Strike, Drake received a decent amount of changes, perhaps for better or worse. His naval units finally have increased firepower, but they lose the increased defense and movement they had in the previous games. The penalty to his air units has been gracefully mitigated; Drake can actually use air units to decent effect now, which compliment any naval force he has built. His CO powers are unchanged, but they are still very good. However, naval combat in Dual Strike is still very weak, despite several new units. In fact, the Black Boat in particular would have benefited more from Advance Wars 2 Drake, as Black Boats would've enjoyed the extra movement and defense while not needing the extra firepower. Overall, Drake has been shifted slightly out of his miserable standing in Advance Wars 2. However, the changes to Drake are not very significant, some of which are outweighed by the abilities Drake lost.

Against Drake, air units are highly effective at disrupting his naval units. Even against his cruisers, Battle Copters and Bombers will deal very high damage. With weaker air units, Drake will struggle at air combat anyway. His CO powers are quite dangerous for the player, so COs with repairing abilities/CO powers are decent counters to Drake. If the map lacks ports or a layout advantageous for naval units, Drake will be forced to resort to his average ground combat and weak air combat. Drake is at his best when his opponent builds a navy, so it may be beneficial to not build any naval units to begin with.

"Wave good-bye to your troops!"

"Time to show you how we do things at sea!"

"Panic is for landlubbers!"

"Prepare to be washed away!"

"I gotta toughen up by the next turn."

"Can't you just feel the riptide washing you out to open sea?"

"Hmmph... You're strong. That's why you're getting this!"

"My CO Power will sting you like a jellyfish"

Drake has Tag Breaks with the following COs: 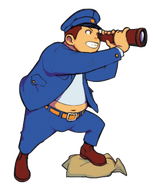 in the first Advance Wars game. 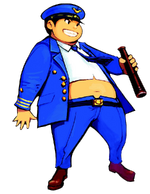 in Advance Wars: Dual Strike.
Add a photo to this gallery

Retrieved from "https://advancewars.fandom.com/wiki/Drake?oldid=12406"
Community content is available under CC-BY-SA unless otherwise noted.