Back to page
View source

Crash Landing(Days of Ruin) or Inside Pulsatrix(Dark Conflict) is the 24th mission in Advanced Wars: Days of Ruin. After completing the mission, Penny is unlocked as a playable commander in Free Battle and multiplayer modes.

Will resigns his position as commander, not wanting anyone else to die for his sake, and heads out to save Isabella, whom Cyrus informs was known as Lutaria. Cyrus also condemns his father's research and decides to aid Will and plans to hack The Great Owl's security systems. Shortly after, Lin and a group of soldiers willingly join him, and since he is no longer commander, he can't stop them. Cyrus succeeds, allowing the 12th Battalion to sneak aboard.

The captured Isabella meets her sister Tabitha, who cruelly dehumanizes her, bluntly saying that her existence was meaningless since she was a clone and one of many others. A shocked Isabella accepts this, weakly calling out for Will. Tabitha questions Penny about this, who then claims there is no one else onboard. She leaves Penny in charge of the Great Owl according to Caulder's orders. As the aircraft takes off, the 12th Battalion launches their surprise attack.

Don't forget that you may always refer to the Tactics section the game gives you. This mission differs in the fact that you are now inside the Great Owl meaning that the terrain offers almost no advantages and is mostly open. For this battle, you will be relying more on the advantages units have over the other and positioning. Your first strike is critical to winning this battle as you should deliver the most damage possible, prioritizing the enemy's strongest. At the same time, try to get into a better position, namely don't bother attacking the tanks with your recons and instead pull them under the protection of your ranged units. You'll want to insure that most units survive with as much health as possible because once all enemies are destroyed, Penny will receive a few waves of reinforcements on the west and east sides of the map, mostly consisting of tanks and rockets. Ensure that most of your units are available and within range of the sides by the time the last enemy falls, and you'll be able to strike the reinforcements first. 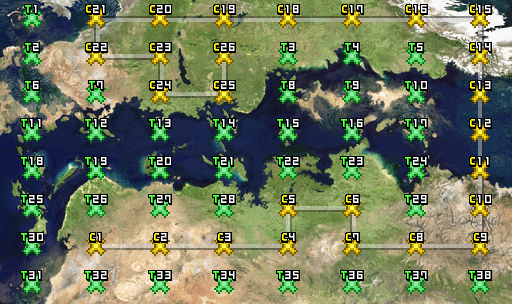