Advance Wars Wiki
Register
Don't have an account?
Sign In
Advertisement
in: Commanding Officers, Advance Wars Days of Ruin COs, IDS COs

View source
“The head of the private military contract IDS. He seeks a world where he is free to carry out his terrible experiments.

Caulder (Berith and Stolos in the Japanese and European games respectively) is the main villain of Advance Wars: Days of Ruin. He is a CO and head of the private military contractor IDS. He seeks a world where he is free to carry out his horrific biological and psychological experiments.

He is first seen in Fear Experiment, where he and his daughter Penny destroy one of the few remaining food sources and where they unleash the War Tank on the 12th Battalion, just to see how they react. Later on, he supplies The Beast with the weapons which he needs to defeat the 12th Battalion. After The Beast fails Caulder kills him.

Afterward, he is seen supplying weapons to the Lazurian Army Supreme Commander General Forsythe. He offers to let Forsythe use his terrible weapons, but the General turns him down.

Admiral Greyfield, leader of the NRA, is not so reluctant though. He has Caulder use a Weapon of Mass Destruction on a ruined city in order to kill Captain Brenner. Afterward, he and Tabitha are seen using an IDS prototype weapon, The Talon Gun, to attack the 12th Battalion and Lazurian Army.

The heroes meet him in the aftermath of Waylon Flies Again. It seems that he was in a ruined building, observing the whole battle. He informs them that Greyfield is almost ready to use his "Masterpiece".

One of the civilians, Dr. Morris, sheds some light on who Caulder is; a scientist whose only interest is to carry out unethical experiments. Lt. Lin infroms them that Caulder is the head of IDS, or Intelligent Defence Systems. He was making a huge profit from the Lazuria/Rubinelle war by selling weapons to both sides. Isabella then says what this "Masterpiece" is: The Caulder Missile. These were sold to both side of the conflict, and all of them were set to launch simultaneously. Frightened by the implications of this, the 12th Battalion sets out to stop the launch.

Throughout the game, there are references to a virus the Creeping Derengea (known as the Creeper to the 12th Battalion and The Green Thumb to the NRA). The virus is tearing through the NRA, and Greyfield orders Caulder to find a cure, or else. Caulder says yes, he has a cure, but there's a more pressing matter; The Caulder Missile System was damaged by the meteor strikes, and that there are a number of locking mechanisms that must be bypassed. Fortunately, the 12th Battalion stops these weapons from being launched.

Once Greyfield dies, Caulder decides that the 12th Battalion might "prove to be worthy specimens for further research." He gives his children Cyrus, Penny, and Tabitha a new "toy"- the giant bomber The Great Owl. He will call off his plane though, he says, if they turn Isabella over to him. They refuse, and Caulder begins the attack. The 12th Battalion barely manages to defeat him.

After he first unveiled the monster plane, he reveals who Isabella is: one of his cloned children. This changes the civilian attitude toward her. They decide to ostracize her. Not used to this kind of behavior, Isabella is so shocked and hurt she goes and surrenders to Caulder, who has her placed on The Great Owl.

This act prompts Will to go and rescue her. He does, but Caulder orders Penny to crash the plane and kill all who are on board. Isabella convinces her otherwise, and after Tabitha's stunning defeat, he calls his children "abject, useless failures!". 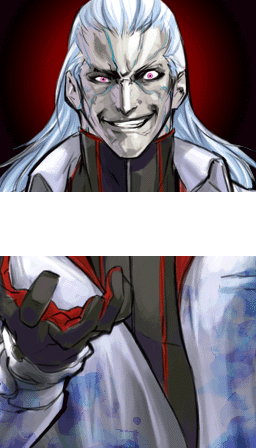 Caulder kills the civilian mayor by tricking him into taking poison that he falsely claims is the cure to the Creeping Derengea and then forces Cyrus to take a poison, that apparently gives a very slow and rather painful death (according to Caulder), after he defected to the 12th Battalion. Will finds Cyrus, who is on the verge of death, and is informed that Caulder has retreated to The Nest, his Headquarters. Inside the Nest is the cure for the Creeper virus. Cyrus dies afterwards.

The heroes pursue Caulder to The Nest, his crowning achievement and the central research facility for Intelligent Defence Systems. The Nest is similar to the Black Hole's Factories, only it's far larger, and is able to fight back. It's been armed with five powerful laser cannons, two of which rotate, and two powerful mortar launchers. It can also build any Land and Air Unit (around day 6, he builds a Seaplane Unit).

During the course of the fight, he tells a little story. He says that, in his youth, cloning technology had advanced by leaps and bounds, but that there was some ethical resistance to the idea. He rejected such concerns, and decided to clone himself multiple times, and to use the clones for organ transplants and for horrible experiments. Eventually though, the clones began to resent being used in such a way. They fought back. After a brief, bloody war, only one clone survived- and he is that survivor! He is a clone, and he killed his creator.

Eventually, The Nest is destroyed, and Caulder perishes along with it.

All units in zone heal 5 points at start of day, healing costs funds.

Caulder is considered unbalanced in the game. In other words, he is disallowed in competitive play under all circumstances due to how powerful his Supreme Boost is.

Though it is very slim to beat Caulder, here are some ways to survive or possibly win:

In order to unlock Caulder as a playable commander, the player must complete Mission 26: "Sunrise".