A CO Power is an ability which most COs in the Advance Wars series have. They can have a variety of effects, from causing massive damage, spawning units, or repairing. As such they can often change the tide of the battle. With each Advance Wars series, slight modifications have been made to CO Powers, though the principal remains the same in all. Each time a player attacks with a Unit, or a Unit is attacked, they gain a small amount of Star power, which fills a bar. Once the bar is full then the players may use their COs' CO Power.

When CO Powers are turned off in Versus Mode, COs' day-to-day abilities are also turned off.

The most basic CO Powers and the only kind which feature in every game. As mentioned above, these vary from game to game in effects.

Introduced in Advance Wars: Dual Strike, the Tag Power (or Dual Strike) is a special option that is available during a double CO battle when two allied CO's have their star meters full, and is able to dramatically turn the tide of a battle. When activated, it empowers all units with the current CO's Super CO power, as well as giving another turn by switching to the next CO (similar to Eagle's CO power, Lightning Strike) and activating his/her Super CO power. Certain CO pairs also affect the damage allied units will inflict, with compatible pairs increasing attack power, and incompatible pairs reducing it.

The CO powers in Advance Wars: Days of Ruin have been revamped, and are no longer as powerful as they were in Advance Wars: Dual Strike (with some COs having no powers). Also, they can only be charged by attacking from within a certain range of a CO unit (the CO zone) or with the CO unit. Note that during an enemy phase, for the player's own meter to charge up via counterattacking, the enemy's own unit has to be in the CO Zone, but it doesn't matter if the player's unit isn't.

According to the developers, this change was made to put more emphasis on strategy, rather than on relying solely on a CO's abilities. 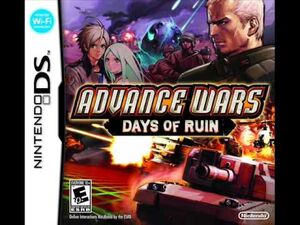 The following "good" characters use the "Power Up" theme when using their CO power: 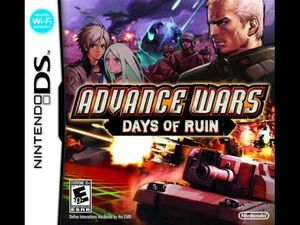 The following "bad" use the "Stormy Times" theme when using their CO power: