Black Hole is one of the five main forces of Wars World. It is featured in Advance Wars, Advance Wars 2: Black Hole Rising and Advance Wars: Dual Strike as the main enemy in all three games.

Black Hole is an aggressive force that seeks to dominate Wars World. Its COs have evil intents and are highly destructive, not caring about how many units they lose, as long as they can achieve their goal.

In the first two games, Black Hole occupies some small islands in Cosmo Land and Macro Land respectively as their base of operation, before being driven out by the Allied Nations.

In the original Advance Wars, the head of the Black Hole army, Sturm, stirred infighting within the nations in Cosmo Land by cloning a CO of Orange Star to wage war on them, in order to deter their forces away from his invasion. In the end however, his scheme was discovered, foiled and Black Hole was defeated.

In Advance Wars 2: Black Hole Rising, Sturm is assisted by other COs - Adder, Flak, Lash and Hawke - in invading Macro Land. Black Hole is armed with new technologies such as the large factories, Black Cannons and Minicannons. However, the Allied Nations managed to defeat Black Hole once again. Cornered, Sturm attempted to use a missile to take the Allied Nations down with him, but was killed by Hawke before he could detonate it.

In Dual Strike, Black Hole is lead by Von Bolt and his Bolt Guard, Jugger: Koal (Zak) and Kindle (Candy). Hawke and Lash from the previous games returned but they've deserted to the Allied Nations when they discovered Von Bolt only wishes to destroy the land to sustain his own life, not to conquer Wars World. Flak and Adder also made an appearance, though not in the campaign. They appear as playable characters for the war room, combat and survival.

At the end of Dual Strike, after the Allied Nations have destroyed Von Bolt's base, Jake will have the option whether to shoot Von Bolt or not. If Jake agreed, he will intentionally miss and hit the chair instead, letting him live to pay for his crimes. However, Von Bolt self-destructs the base, attempting to take everyone down with him. If Jake chose not to shoot, Hawke will step in and do so instead, disabling the chair's life support system. The base automatically collapses on its own. Regardless of the choice though, everyone but Hawke escaped, with him still staying as the base collapses, claiming he had "one last job", and bid farewell to Jake. The ending revealed that Von Bolt survived, though now in a vegetative state without his chair, as Hawke, survived though his current location unknown, had taken the power stored in it to restore Omega Land. Koal and Kindle, who also survived, retreated as Black Hole is officially disbanded. 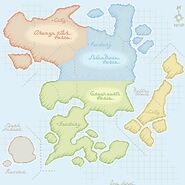 One of Black Hole's many creations, Oozium 358
Add a photo to this gallery
Retrieved from "https://advancewars.fandom.com/wiki/Black_Hole?oldid=12166"
Community content is available under CC-BY-SA unless otherwise noted.