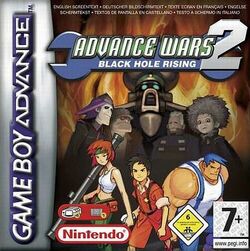 While the Allied Nations were still recovering from the war in Cosmo Land, the Black Hole Army has already recovered and is launching a large-scale invasion on Macro Land. Lash has also invented several new war weapons that are put to use in this invasion. Along with the original Black Hole army's COs, four new COs were recruited, under the command of Sturm. Sturm, with an ominous new look, orders each Black Hole CO to invade and capture each of the four countries owned by the four other armies from the original game: Flak is assigned to take Orange Star, Lash to take Blue Moon, Adder to take Yellow Comet, and Hawke to take Green Earth. The four armies must now work together to drive Black Hole out of their world once and for all.

Near the end of the campaign, when the Black Hole COs have been driven from the nations of Wars World, the COs meet up in Black Hole's base of operations, where they fight Sturm one last time. The final battle takes place in front of the Death Ray, a powerful new weapon guarding the entrance to a missile, which, in 30 days, will destroy half of Wars World. Thankfully, the Death Ray is destroyed. The Allied Nations COs disarm the missile and corner Sturm, who attempts to blow up the base and kill everyone by self-destructing the missile. Andy steps forward to stop Sturm, to no avail. However, just as it seems Andy will be killed, Hawke, second only to Sturm himself, betrays his leader by killing him with Black Storm, his Super CO Power. Afterwards, Hawke takes over as leader of Black Hole. Along with Flak, Lash, and Adder, Hawke leaves Macro Land with the few troops he has left

As with every Advance Wars series game to date, Advance Wars 2: Black Hole Rising featured a new Unit, the Neotank. Developed by Black Hole, they were the strongest Tank in the game, even stronger than the older Medium Tank.

New COs and CO powers

Advance Wars 2: Black Hole Rising also brought with it several new COs. All Forces gained at least one CO, though Black Hole gained an extra four. As well as all of these new COs there was a major change to CO powers, all COs gained a normal CO power and a stronger Super CO power (Except Sturm who lost his CO power, only gaining a Super CO power).

Retrieved from "https://advancewars.fandom.com/wiki/Advance_Wars_2:_Black_Hole_Rising?oldid=10527"
Community content is available under CC-BY-SA unless otherwise noted.