Turn-based Strategy
Advance Wars: Days of Ruin, also known as Advance Wars: Dark Conflict in Europe and ファミコンウォーズDS 失われた光 in Japan, is the fourth game in the Advance Wars Series of games. It involves a new list of COs, Forces and many changed Units. It has a much darker tone and feels than the previous games, as well as having a storyline that is independent of the other games.

Several details distinguish each version, such as differences in the names of the factions, characters, and units, as well as significant dialogue changes. This is due to Nintendo of America and Nintendo of Europe receiving Japanese copies of the game to translate independently, resulting in unique versions for each region.

The setting is a post-apocalyptic world, one that's been devastated by meteor strikes. The objective is the same as ever, to win battles involving different forces.

The gameplay, while keeping the same formula as the previous Advance Wars games, differs greatly. Unlike previous installments, the developers kept the game in a more balanced and competitive environment.

The CO System has been altered dramatically. Here are a couple of changes:

The following units have been removed:

The following units are new to the game:

The following units have been received changes:

The plot of Days of Ruin is considerably darker than, and unrelated to, the plots of previous games. 75% of mankind has been killed off following devastating meteor strikes, which have destroyed much of civilization and caused a massive dust cloud to blot out the sun. Scattered survivors pick through the wreckage, and the remnants of several military superpowers patrol the ravaged landscape, some factions protecting the innocent while the others prey upon them.

Following the disaster, which obliterated much of the warring nations of Rubinelle and Lazuria, a young cadet from the Rubinelle military academy named Will escapes the ruins of the academy's mess hall and is confronted by The Beast, a former sergeant gone rogue who leads a small band of raiders. Will is rescued by Brenner and Lin of Rubinelle's 12th Battalion (nicknamed "Brenner's Wolves"), and takes on the group's cause of saving as many survivors of the meteor strikes as possible. During a search, Will discovers a mysterious amnesiac who does not remember her own name, but somehow knows detailed military information. Will later dubs her Isabella, and she becomes a vital part of the battalion as they put an end to the Beast's reign of terror.

One year after the meteor strikes, the 12th Battalion comes into contact with the New Rubinelle Army, and learns of the war raging between the Lazurian Army and the NRA. Brenner reluctantly sides with Greyfield, leader of the NRA, and advances on the Lazurian force, eventually defeating them at Fort Lazuria. Distraught by the ruthless execution of the Lazurian commander, Forsythe, Brenner and the 12th Battalion break the Lazurian prisoners out of an NRA internment camp before they are also executed. While the group escapes, Brenner stays behind and hides in an abandoned city to buy them some time. An infuriated Greyfield orders the use of a new weapon which completely destroys the city, killing Brenner and the NRA troops searching for him. As they retreat, they desperately fight off Greyfield's encroaching armies. Will, who was placed in command of The Wolves following Brenner's death, remembering something that Brenner said earlier, decides to take the fight to the NRA, and make Greyfield and Waylon pay for Brenner's death. Hearing from Caulder himself that Greyfield wants to use the Caulder Missiles against them, Lin leads a force against Greyfield, preventing him from launching the missiles and defeating the NRA once and for all. In the process, Lin personally shoots and kills Greyfield, avenging Brenner's death.

The 12th Battalion is unexpectedly attacked soon after by Intelligent Defense Systems, a private military contractor that had secretly supported first the Lazurians, then the NRA by supplying them with weapons of mass destruction. Caulder, leader of the IDS, had taken advantage of the world's devastation to carry out horrific biological and psychological experiments that he would have been unable to undertake otherwise, such as creating and spreading a terrible new disease, the Creeper, for the sole purpose of studying the survivor's reactions. Despite numerous demoralizing attacks by IDS and its massive bomber, The Great Owl, the battalion survives and eventually pursues Caulder to his main laboratory and fortress, The Nest. In the end, Caulder is killed in the destruction of his lab, and the war is finally brought to an end. One year later, the city of New Hope, founded by the 12th Battalion after the conflict, begins to flourish in the new-found peace. The sun is seen rising above the nearby hills for the first time since the meteor strikes, giving hope of a brighter future. 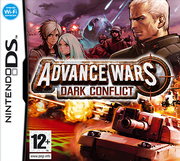 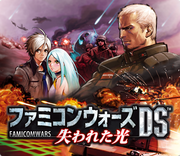 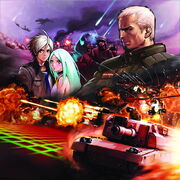