The 12th Battalion (Independence Company in Japanese and Independent Legion in the European version, also known as Brenner's Wolves) is a Force in Advance Wars: Days of Ruin. It was originally led by Brenner, with Lin as his Second in Command. Following the deadly meteor strikes, the remains of the battlion searched the ruined land for survivors before being dragged into the Lazurian-NRA War by Greyfield, ultimately fighting against Greyfield himself. After Brenner's death, Will assumed command of the Battalion, eventually leading it to victory. Due to the fact that it is originally from Rubinelle, it has the same soldier template as the NRA. 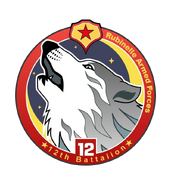